Born in Southern California, Les Allert moved to Simi Valley at the beginning of high school.  He developed a strong interest in the biological sciences while collecting reptiles with his neighborhood friends.  He earned his college degree from California State University, Northridge in Biology.

Following a poor attempt to photograph the solar eclipse in 1994, he began taking photography classes at Mohave Community College in Lake Havasu City, AZ.  After taking a class in large format photography, he was hooked.  Buying his instructor’s camera, he now has been creating large format, fine art photography for more than 20 years, concentrating on landscapes, modern and historic architecture, and most recently, abstract features found in these subjects. 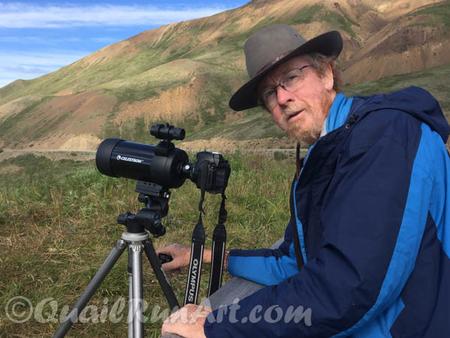 Moving to Alpine County in 2007, Les and his wife, Jill, built their dream home, including a dedicated darkroom.  Wishing to continue to learn more aspects of photography, he began taking photography classes at Lake Tahoe Community College and participated in the annual Student Art Exhibit each spring.  In 2017, Les took the Exhibit class that organizes the Student Art Exhibit and was involved in all aspects of putting on a professional large scale art exhibit.  He also explored the platinum printing process which he used on all of the photographs he entered in the exhibit.  This was met with the awards of, not only first place in film photography and Technical Merit for individual pieces, but also Emerging Artist for the body of work.

Through his photography, Les has been driven to expose the viewers of his art to new ways of looking at the environment around them, to see those things often overlooked.  Focusing on the ground glass of the large format camera shows an image that is upside down and backwards, thus forcing him to give careful consideration to the composition, as well as the design features of line, shape, texture and form.

In the last few years, Les has been exploring alternate printing methods, such as Platinum printing.  Going the extra step, he is also beginning to do Gum over Platinum printing now he has been learning Platinum over Pigment printing.  Since he has already taken all the photo classes at LTCC that he is interested in, he and Jill have been taking printmaking classes.